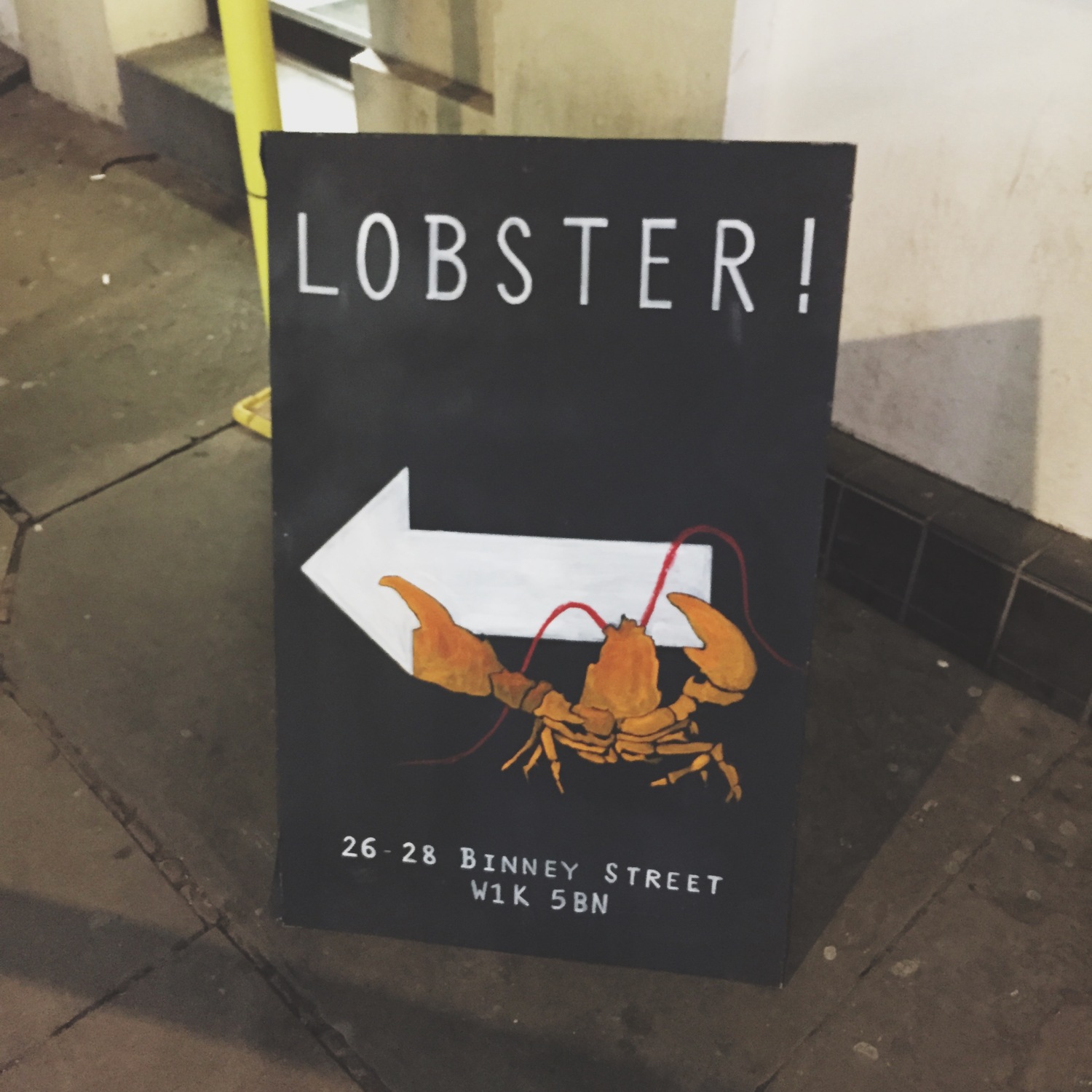 Smack Deli is the Burger & Lobster team’s go at fast food. On this occasion Burger & Lobster have ditched the burgers and the ‘restaurant’ to concentrate on what they do best, brioche lobster rolls, sold from a takeaway counter.

Situated near Bond Street station, it’s refreshing to find an eatery in a central London shopping area that isn’t McDonalds or Pizza Hut (usually only chain restaurants can afford such locations). That said the eat-in prices at Smack Deli do kind of justify their location – at just under a tenner (£9) for a lobster roll it’s pretty pricey! We headed down, just before 7pm on a Thursday evening. First of all I was surprised by the size of the place! It covered 3-shop fronts, including an open kitchen, ordering and collection counter, bar style eating areas, a basement with another bar and extra seating! I loved the interior, with “Wine & Beer” written in lights and mermaid artwork projected onto the dark walls. It was quirky yet artistic and classy.

Smack Deli’s menu is simple, there are four lobster rolls on offer and the option to order a whole lobster served cold, with lemon mayo. Sides are limited to either courgette fries or lobster chowder.

I was torn between the rolls on offer, none of them stood out to me as a must-order so I took to Twitter to ask a handful of trusty bloggers which they’d recommend. The votes were in and unsurprisingly it seemed as though everyone had a different favourite! But the top two were coming out as the California and the Seven Samurai, which we went ahead and ordered.

You’re given a buzzer, which goes off when your order is ready. Food is served in throwaway packaging, which makes, um, throwing it away easy…

The Seven Samurai turned out to be my favourite roll, cold chunks of lobster served with Japanese mayo, Japanese cabbage, cucumber, pickled ginger, spring onions and togarashi spice. Both were beautifully presented in a warm, toasted brioche bun. The Seven Samurai had a real kick to it, but the flavours against the shellfish remained balanced.

The California was a lot fresher because of its juicy ingredients like lettuce, tomato, cucumber, avocado mayo with lime and chives. Both rolls could have had a bit more filling crammed into them, as there was definitely more roll than lobster. This was made better though by ordering the Lobster Chowder, which was perfect for dipping leftover brioche in! 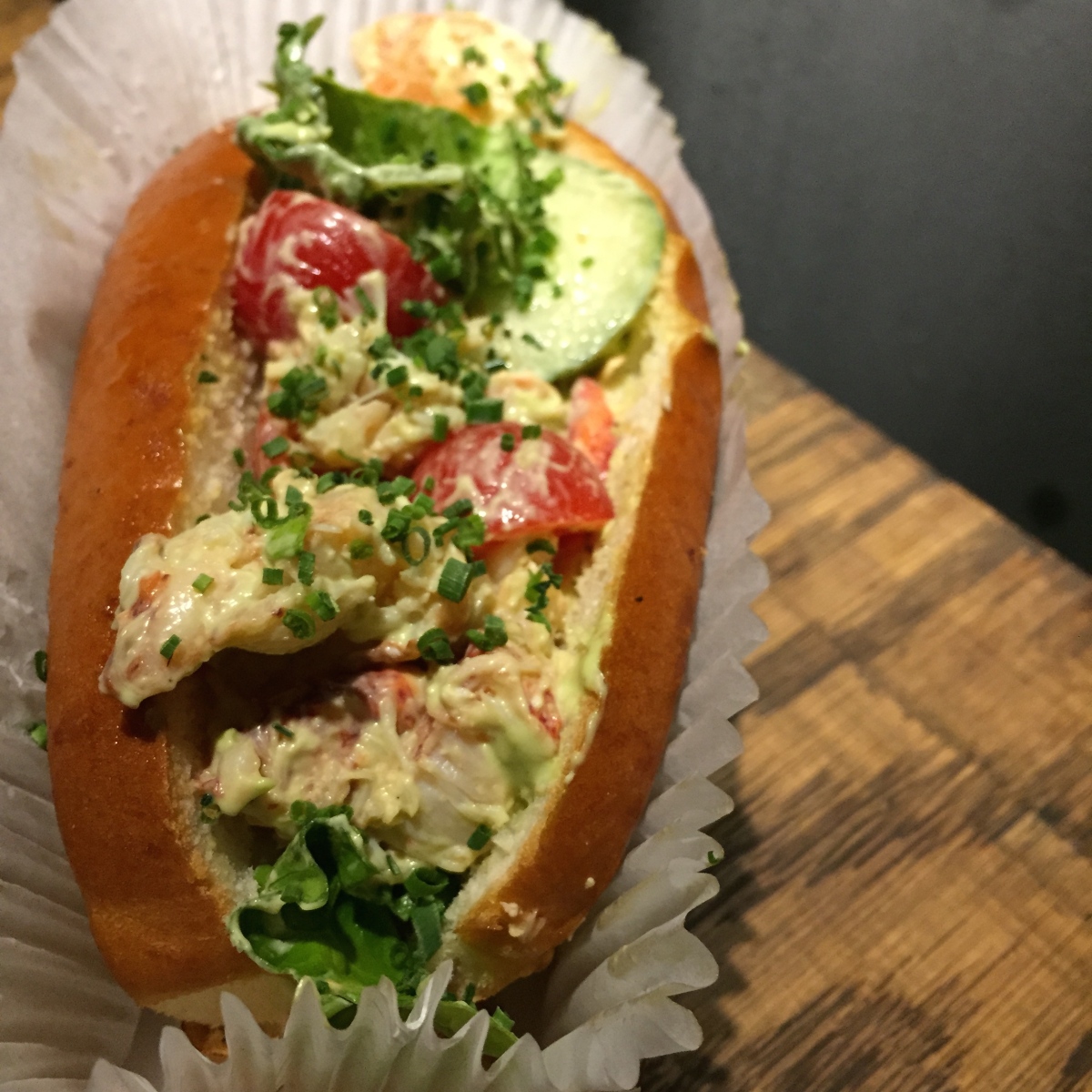 The Lobster Chowder was unfortunately served lukewarm and by the time we actually got around to eating it, it was near enough cold. Chowder is what one would call a seafood or vegetable stew. Often served with milk or cream it’s normally eaten with saltine crackers (or in our case leftover brioche!). Smack Deli’s Lobster Chowder was delicious in flavour and thick with chunks of lobster.

Now, I loved them! They were crispy on the outside yet still moist on the inside – as you would expect courgette to be. On the other hand they really didn’t impress tonight’s dining partner! He had the opinion that they were too wet and not salty enough. To be fair, they 100% are not chips so don’t expect to be as full after a portion of these.

I really enjoyed Smack Deli, yes it’s pricey for a meal that probably isn’t going to fill you up unless you spend £25 a head. But it’s not the kind of place you’d go to on a regular basis. As I said at the beginning of the review – it’s refreshing to have an alternative to Maccy D’s on Bond Street. For me Smack Deli is definitely the kind of place I would happily dine on my own after a hard-core weeknight Christmas shopping session. More importantly than that, if you’re a lobster fan then really what’s not to like?