A weekend in Suffolk to visit my family led to Sunday lunch at The Unruly Pig in Bromeswell, Woodbridge. I went to school in Woodbridge, a market town that lies along the River Deben described by The Suffolk Coast as the ‘gem’ in Suffolk’s crown. It was a wonderful place to grow up but once you reach your teens there’s little to amuse yourself with other than historical attractions like Sutton Hoo, an Anglo-Saxon burial ground or the Tide Mill, a restored tide mill from the 12th century.

Good restaurants have always been hard to find in Suffolk, albeit my love of eating out begun once I’d left home. A few favourites from my childhood include The Crown in Stoke-by-Nayland and The Leaping Hare in Bury Saint Edmunds. I have fond memories of the site The Unruly Pig sits on, in a previous life it was known as the Cherry Tree pub and I loved it for its bouncy castles in the garden and jelly and ice cream on the menu. Since transforming into the British Larder (now an online recipe resource) in 2010 and later into The Unruly Pig in 2015 it’s certainly undergone a face lift or two inside and out.

But The Unruly Pig hasn’t had an easy ride. A couple of months after opening it was partly-destroyed by a fire! The owners were eager to rebuilt and resurrect it in time for Christmas and that they did. Since reopening it’s been recommended by Michelin, Harden’s, The Sunday Times and Financial Times as well as becoming an Estrella Damm UK Top 50 Gastropub Award Winner plus being awarded with the highest local rating in The Good Food Guide 2018. 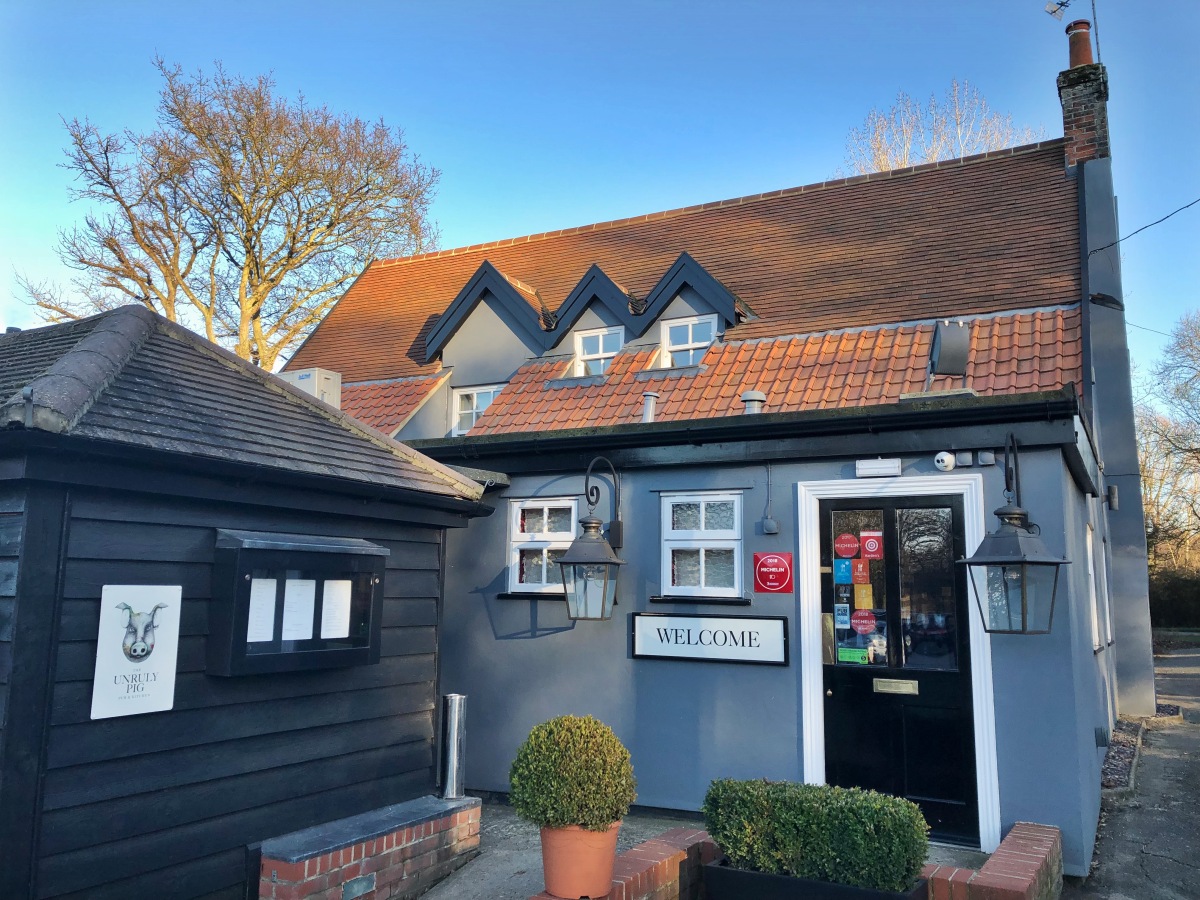 I first went to The Unruly Pig on a sunny day in May ’16 where I enjoyed a wonderful fillet of hake with grains, peas and asparagus and a deconstructed Eton mess (see featured blog image) for pud. It was fantastic the first time around so I was looking forward to seeing what round two had in store for us.

We started with a couple of nibbles including Pump Street sourdough bread, pane carasau (a type of Sardinian flat bread) with onion dip and rich olive oil. 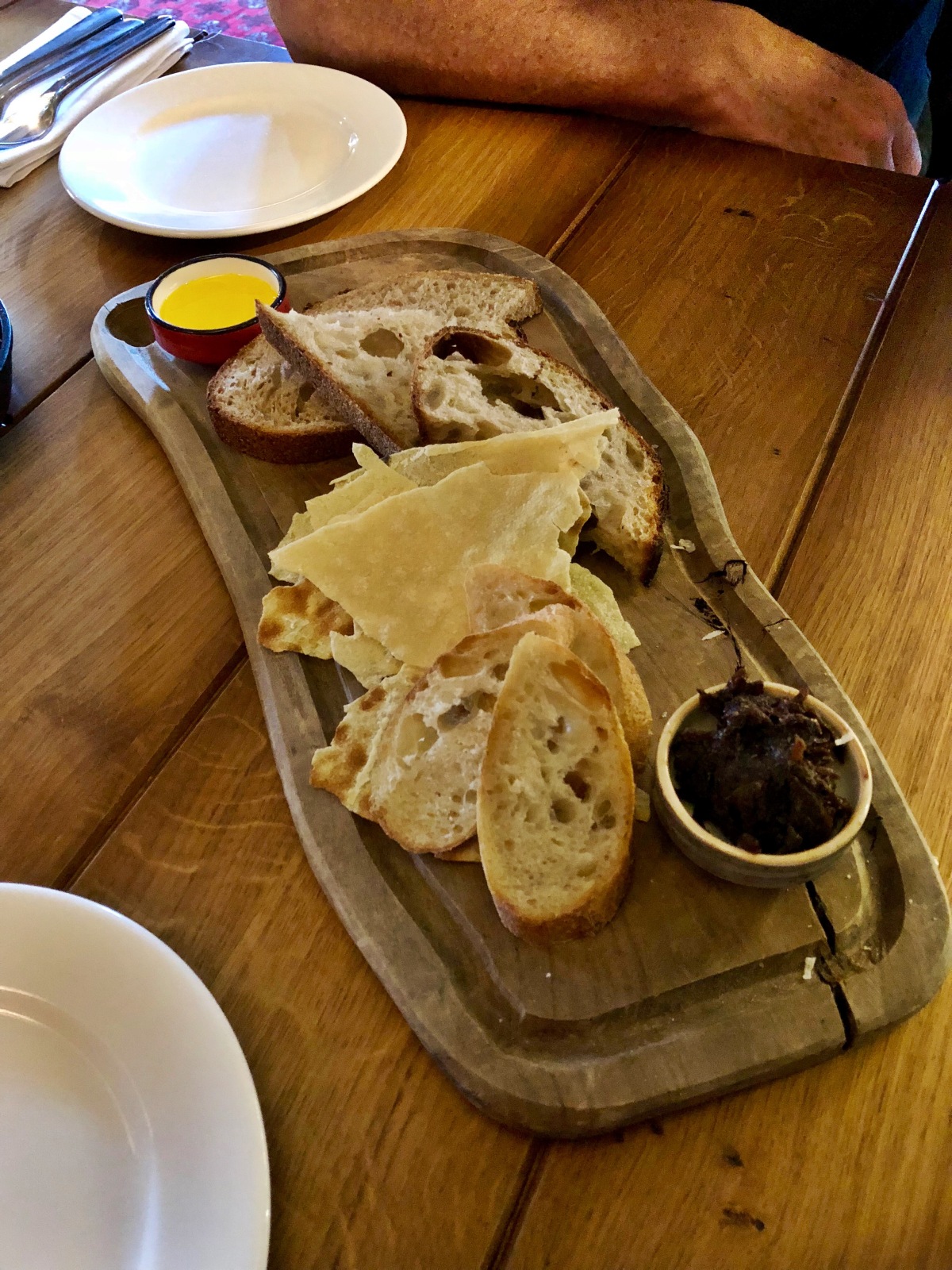 A side dish of Nduja, chorizo, taleggio (Italian cheese) arancini accompanied the bread. The deep fried risotto balls had a brilliant kick from the nduja (pork salumi from Italy) perfectly mellowed by the pot of yogurt.

Since there were three of us dining we managed to try a selection of dishes from the menu between us. The first was the Skate special, the fish rested on a mound of wild garlic mash with capers and lemon. The waitress told us that the chefs had foraged the garlic themselves which is a sign of passionate cooking in my eyes. Passion that you could taste in the exquisite flavours of this dish.

I went for the Bream which was inka grilled and served with brown crab crushed potatoes. Apparently an “Inka” oven can cook at temperatures of more than 400 degrees which results in authentic charcoal-grilled flavours. Topped with salty samphire, the combination of flavours was wonderful. Since the fish was whole, it was a bit of a fiddle to eat and avoid the bones but the wonderful flavour helped me soldier on. 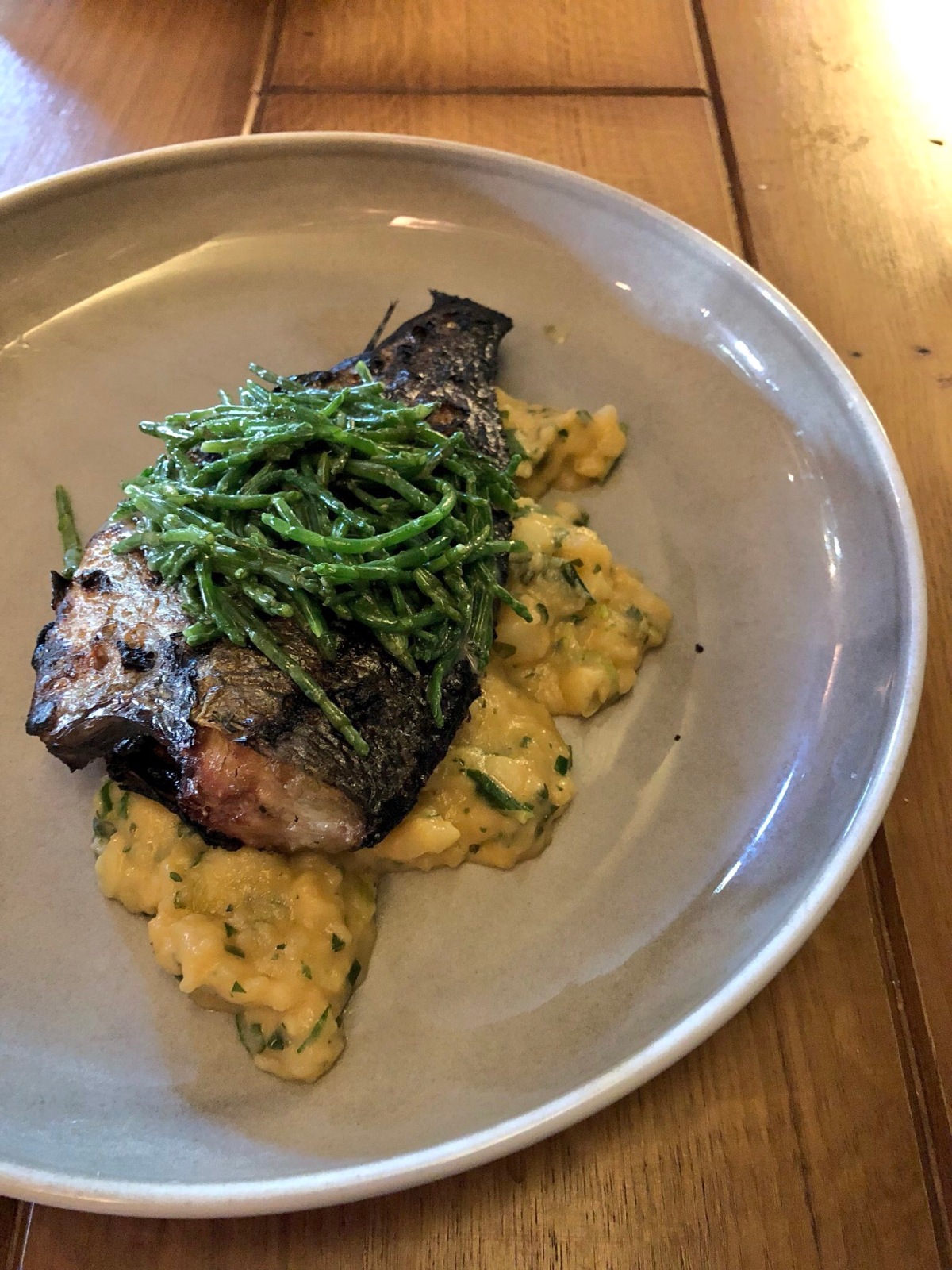 The roasts at The Unruly Pig looked equally epic. The Rack of Pork with dripping roasties and roots was so juicy it tasted like it had been poached not roasted! It had a thick layer of pork crackling around the meat and came with a side dish of wilted greens.

The selection of puddings was hard to choose from. Between us we sampled the Sponge Pudding, Chocolate Tart and Panna Cotta. The pistachio sponge pudding looked fab swimming in figs and whisky custard.

The Pump Street chocolate marquise was flavoured with espresso, salted caramel and topped with honeycomb. 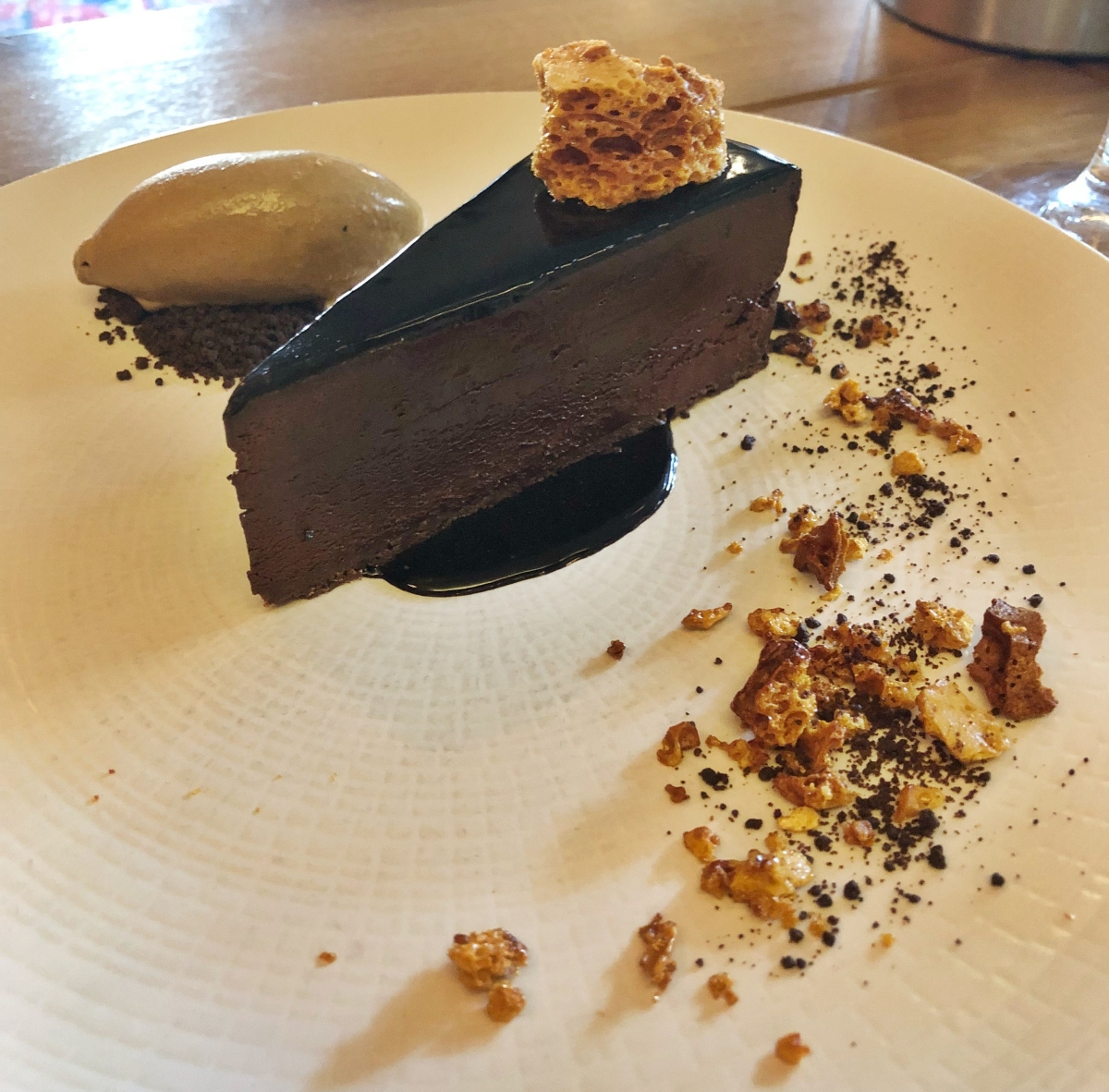 The blood orange panna cotta was equally well presented with plum sorbet, dusted with pain d’epices (a French cake made from rye flour, honey and spices). All of the desserts provided a fantastic end to what had been a highly recommended meal at The Unruly Pig. 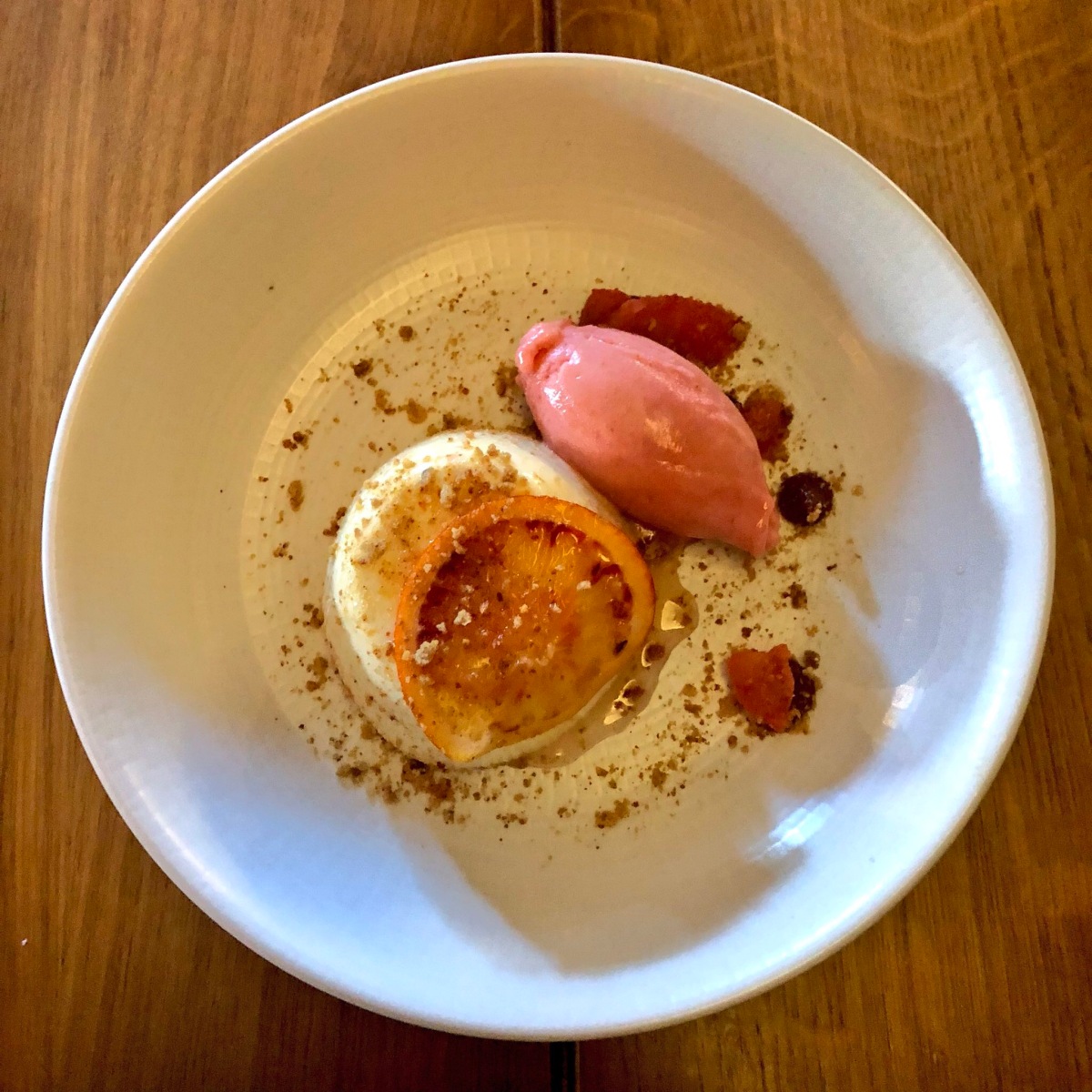 A little piggy told me that they’re trialling a tasting menu at The Unruly Pig – if that’s not enough to secure my third visit then I don’t know what else is. See you soon!