Having started out as a tiny green van in Soho, Pizza Pilgrims’ Napoli inspired street food was a hit from day one. In the summer of 2013 Pizza Pilgrims decided to open up it’s first permanent home on the corner of Dean Street, right opposite Soho’s Pizza Express branch.

It was the first day back at work after the New Year, so my friend and I owed ourself decent dinner plans to help us get through the day. Meeting at Oxford Circus, and popping into Libertys to collect my 2014 diary beforehand I was ready to kick off 2014 how I meant to go on – by eating good food. 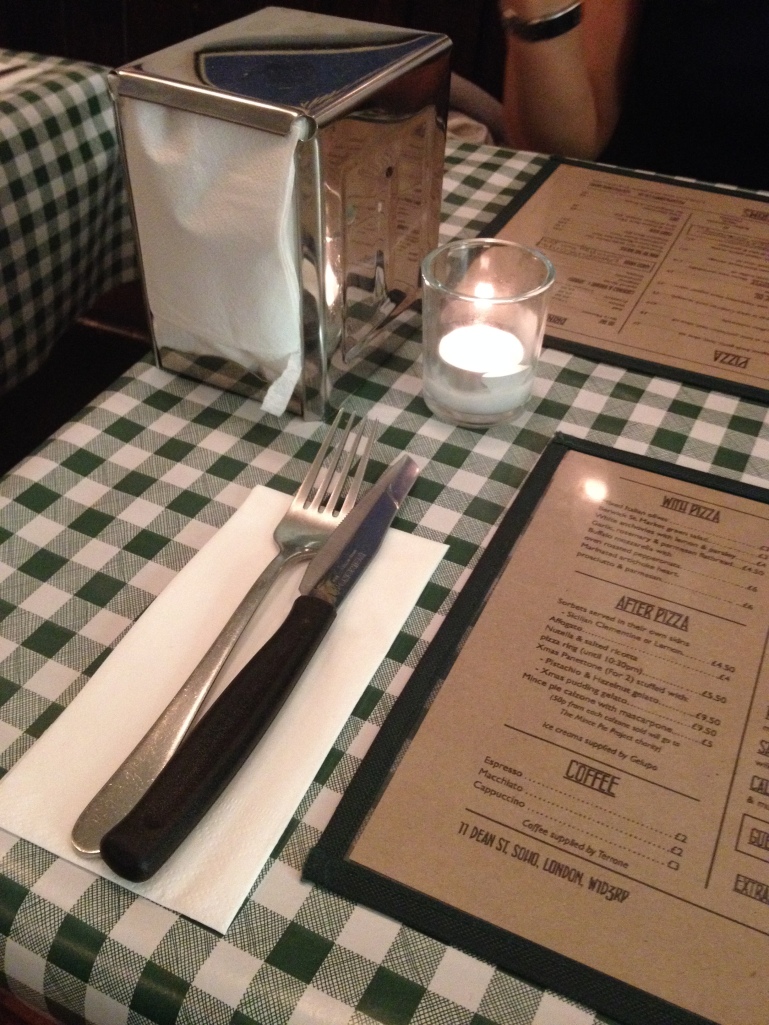 The kitchen and pizza oven is on the ground floor of the restaurant surrounded by a few high tables and stalls. We were taken to a table in the basement where the majority of the table seating was. It was close to 7pm on a Thursday and the space must have been half full. By the time our food was being served most tables were taken.

Sanpellegrino’s ordered we attacked the menu. 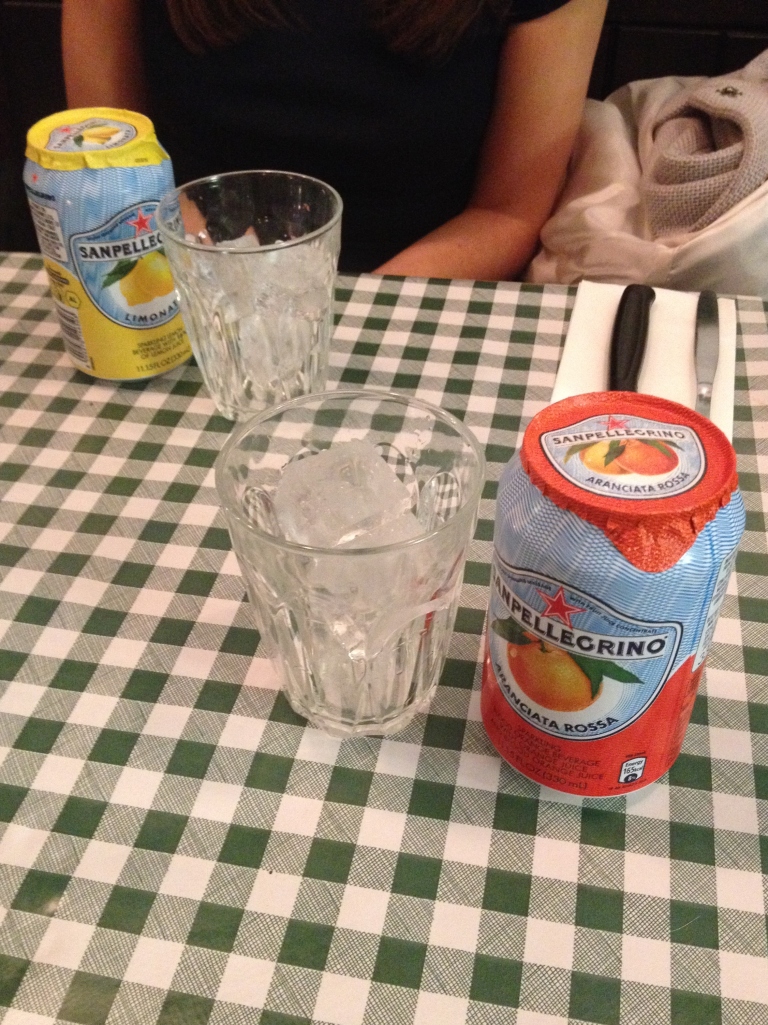 I was set on ordering today’s Guest Pizza, the Aubergine Parmigiana – oven roasted aubergine, cheery tomatoes with buffalo mozzarella and parmesan. But only as we were ordering we were told there were no more available! Heartbroken (lol) my dining partner and I decided to keep things simple and go for the Bufala, margherita with buffalo mozzarella. 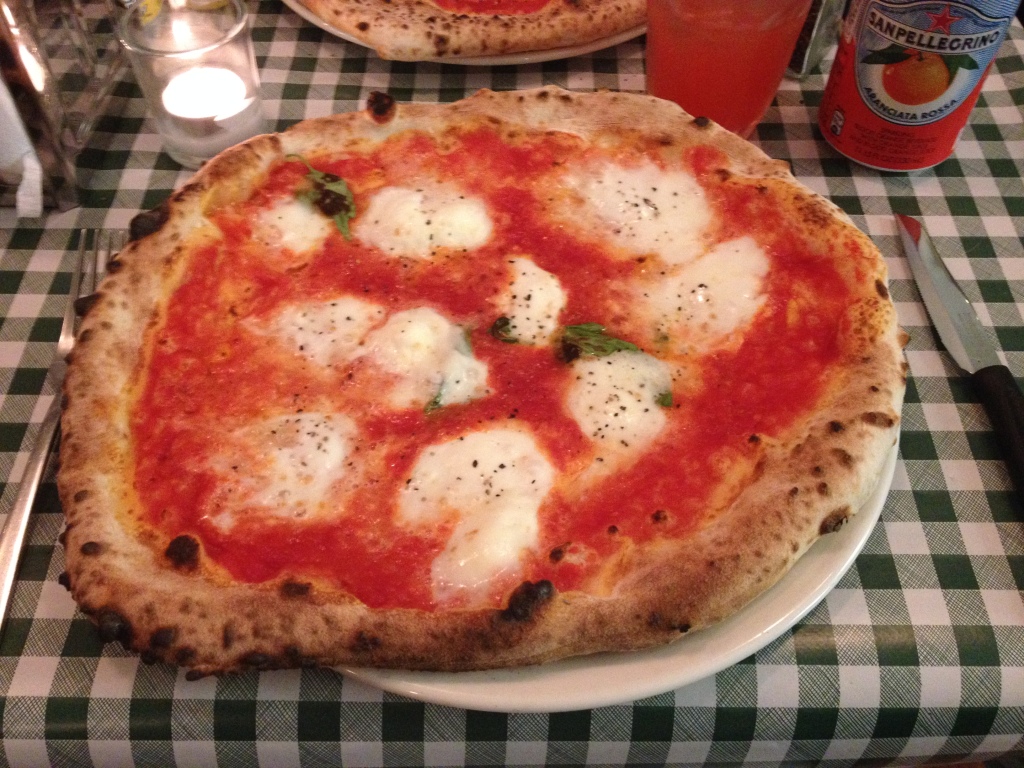 Arriving at our table on a plate smaller than the pizza the tomato cheesy goodness looked to die for. The base was doughy and had the charcoaly flavour to it that you get when things are cooked in a wood fire oven. The tomato sauce was rich in flavour and tasted delicious combined with the milky buffalo mozzarella cheese. As you’d expect it was very filling but we had a good time eating and chatting.

Before we knew it our plates were empty! 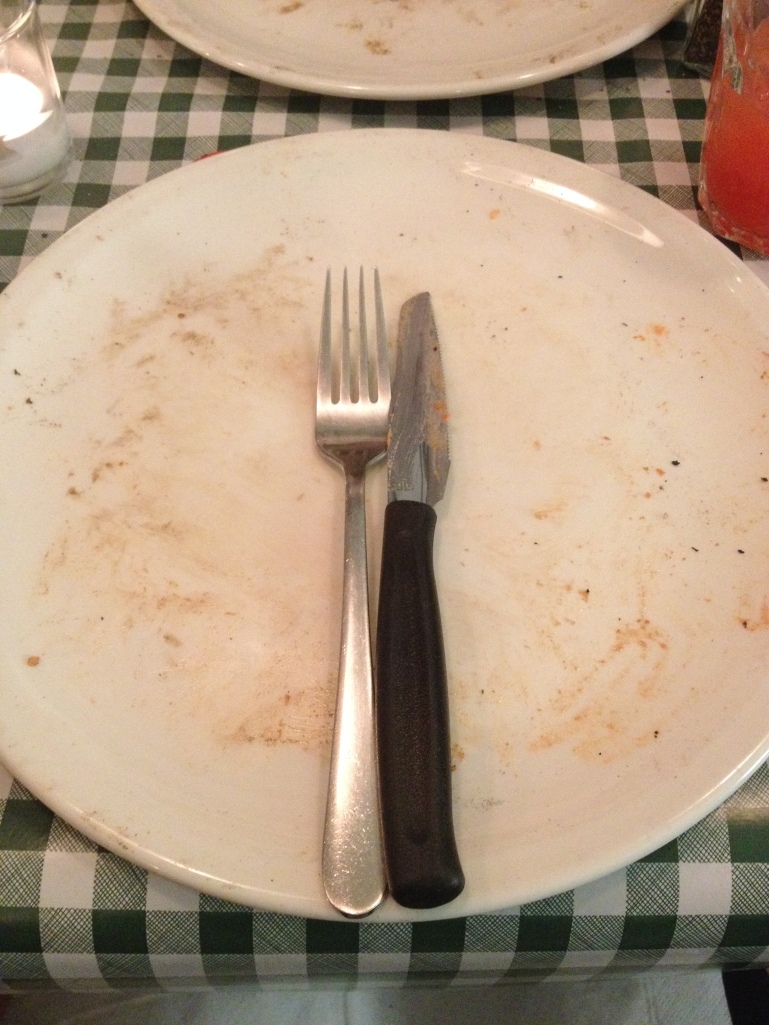 Now, I couldn’t say no to desert – only because I’d heard such rave reviews about the Pizza Pilgrim’s Nutella and salted ricotta pizza ring. We decided to order one between us (£5.50) – fyi they were only served until 10.30pm. Not really knowing what to expect we were presented with a ring of warm pizza dough stuffed with chocolate and cheese and sprinkled with icing sugar. 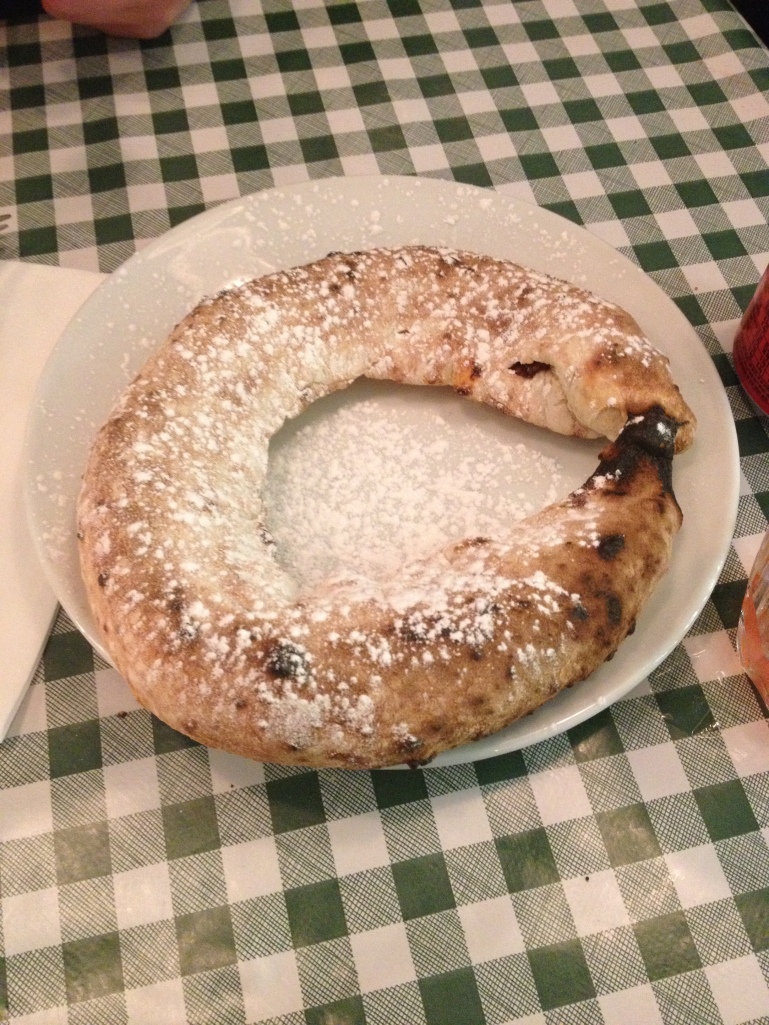 The inside of it was sweet, smooth, nutty, salty and warm. Perhaps a little sickly for some – but we both enjoyed it. I definitely couldn’t have eaten a whole one on my own, in fact I don’t even think we managed to clean the plate between us but it very delicious. 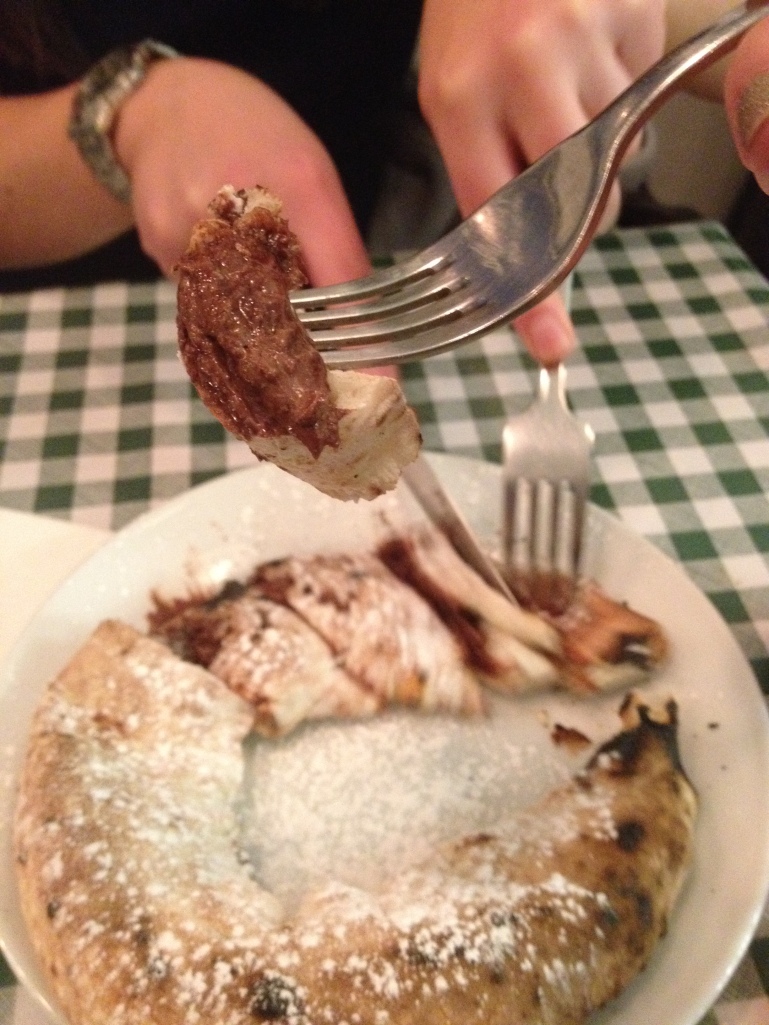 I really enjoyed our meal at Pizza Pilgrims – it was the perfect place for a catch up. There was a great atmosphere and delicious home cooked food. And all for a very good price! Worth a visit on all counts. 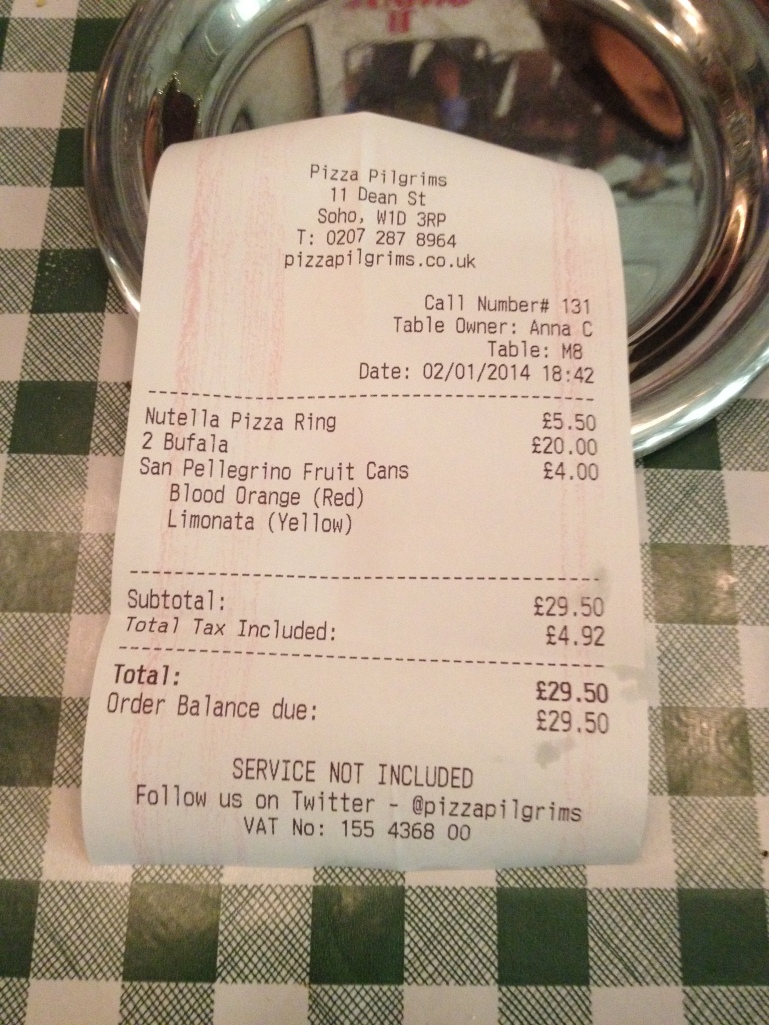