If you’re hungry for a good burger (or two) and you’re in, around, or even passing through Nottingham then Annie’s Burger Shack is the place for you. With previous residency at the Old Angel, The Navigation Inn is Annie’s current home located right next to the canal. The venue itself has a nice relaxed atmosphere and a musical themed decor.

My first trip to Annie’s Burger Shack was on a Friday evening at about half 5. Annie’s stops serving food at 8pm Monday to Saturday and until 6pm on Sundays so you should either be looking to grab a lunch time or teatime burger. The majority of the tables in the restaurant seat between 4 to 8 (maybe 10?) people so as we were only dinning for two we ended up with one of the smallest tables right next to the door. This wasn’t a problem though, even with people coming in and out it was neither a distraction or cold (with it currently snowing in Nottingham, warmth was important!). We ordered a pint of Strongbow (classy) each, £3.10, from the bar before reviewing the menu.

Now, this isn’t any old menu of burgers, unlike places such as Gourmet Burger Kitchen all burgers came with a choice of curly fries, skinny fries or homemade cajun wedges. All burgers on the menu can be made from vegan, veggie or beef and are served in a toasted bun. Prices range from £6.90 to £10.90 which is decent considering the size and quality of them. 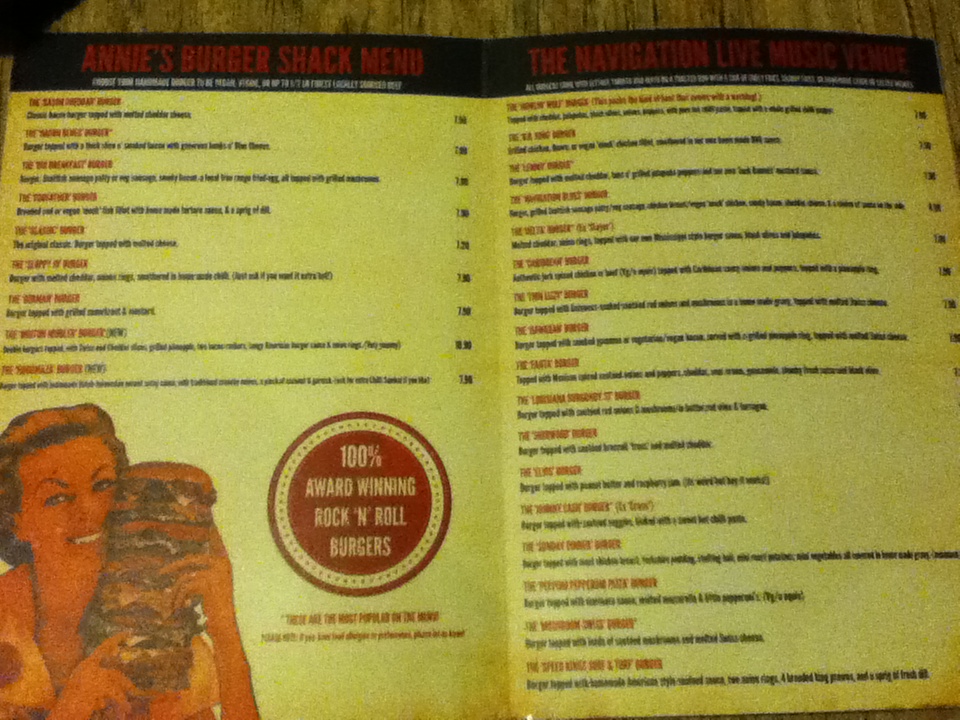 So, you’ve chosen whether you’re going for the vegan, veggie or beef burger and you’re almost certain how you’d like your potatoes, the next question is (and it’s a tricky one) what burger are you gonna go for? On this occasion I chose the ‘Speed Kings Turf & Surf’ and my dinning partner went for the ‘Boston Nibbler’. The menu offers a huge range, from ‘The Elvis’ – peanut butter and raspberry jam to the ‘Thin Lizzy’ – Guinness soaked sauteed red onions, mushrooms, homemade gravy and swiss cheese. You can tell that every option has been well thought through, tried and tested to ensure perfection. 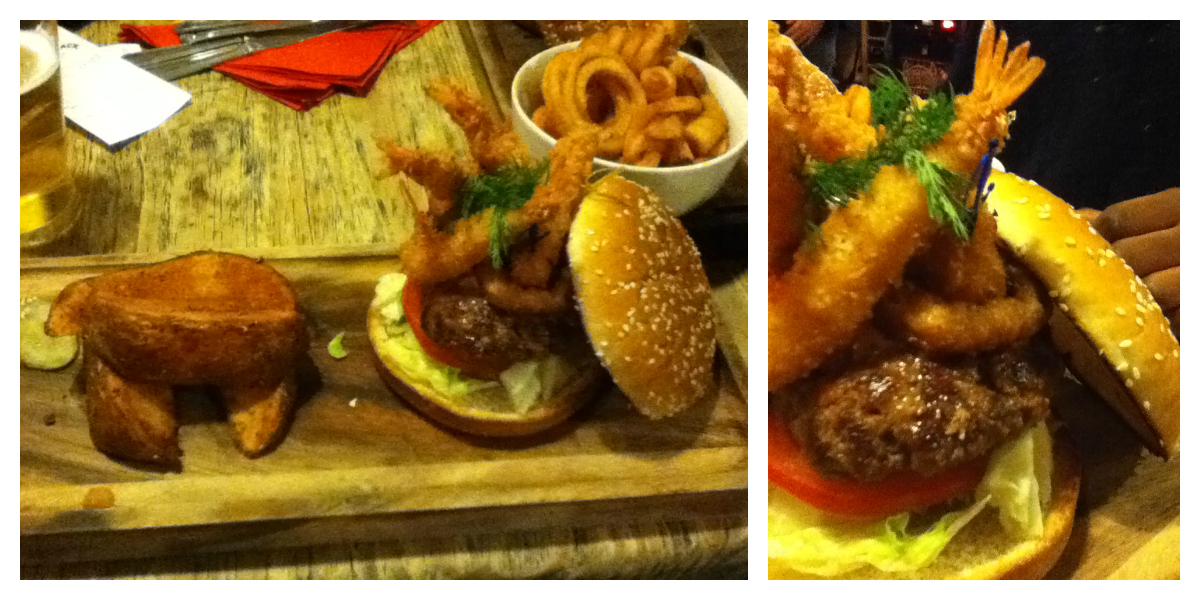 Let’s start with a review of my seafood burger, as a meat eater I went for a beef burger which was topped with homemade American style seafood sauce, two onion rings, 4 breaded king prawns and a spring of fresh dill. The breaded prawns were absolutely delicious, I wanted to savor everyone of them. As I’m not a mayo fan, I asked for none on my bun which was listen to and even came up as a specification on the receipt (so many places when requesting no mayonnaise forget) but because I didn’t have that added moisture already on the bun I could have done with some extra seafood sauce on the burger. It was also delicious but there wasn’t quite enough for my liking, so next time I’d ask for extra. The cajun wedges were also delicious, full of spice. The four wedges on my board must have equaled to half a big spud and were very filling. Because the content of the bun was so full, I had to take out the prawns and close the bun before cutting it in half and picking it up to take a bite.

The ‘Boston Nibbler’, also a beef but x2 burgers, came with Swiss and Cheddar cheese melted on the top of two bacon rashers, taggy american burger sauce, a slice of grilled pineapple and onion rings – yeah, it was a whooper! I tasted a few of the curly fries, which were great and a very decent portion size. As this burger was so huge, my dinning partner split it in two, using the top of the bun as a base for the second beef burger. His only criticism was that the bread bun was dry, which is interesting considering that was my only complaint also – maybe it wasn’t just the lack of mayo! But he did say that the American style burger sauce was amazing. So all in all, both our burgers receive a thumbs up.

Nottingham visitors looking for something filling and unique for lunch should look no further than the Navigation. Set down by the waterfront, this is slightly off the beaten track but ideally situated between the train station and the castle area. There really is something to suit everyone on this menu and veggies/vegans are well looked after. Warm welcome and great time had by all.